Strain partitioning has interested me since I first heard about it. The basic idea is that in some regions, the strain field is not aligned exactly with the dominant fault system, so that fault system can't act as a 'pure' strike-slip or dip-slip fault system and relieve all of the accumulating interseismic strain. But instead of slipping obliquely, a second fault system comes online (forms or reactivates) and each of the systems work in tandem to accommodate the regional strain field through 'pure' faulting.

I don't know when the first phenomenological observations were made, but T.J. Fitch did a bit of pioneering work when plate tectonics was still in diapers-- his 1972 paper in JGR is a classic on the matter in subduction zones, where strain partitioning is readily observed, as convergence is taken up on the megathrusts while transcurrent motion is taken up on upper-plate strike-slip faults located near the volcanic arc. Richard Jarrard and Rob McCaffrey worked on the problem in the 1980s and 1990s at the plate-boundary scale, and Basil Tikoff and collaborators worked on the structural aspects a bit more. (Many other scientists have done important work on this; these names are the first that come to mind. I might update this post with more references if I get a chance.)

Physical explanations for strain partitioning (also called slip partitioning) generally invoke the argument that it is frictionally favorable for dip slip on the dipping plane with a long down-dip width and strike slip on a vertical fault with a much shorter down-dip width (as the lower locking depth will be the same or even less; a vertical fault gets to a fixed depth with the minimum of fault area). There may also be arguments relating to shear stress vs. normal stress ratios as the stress tensor will be resolved differently on planes of different orientations--I've had seminar/water cooler conversations where this has been brought up, but I haven't seen the math and it might work out to actually be the same thing. (It also seems to be much less common in mylonites than in the brittle faults that lie up-dip, even on the same plane. I've seen this in my own work on Tibetan core complexes.)

Strain partitioning is usually observed in fault traces and focal mechanisms in map view. The ridge-transform-ridge pattern of mid-ocean ridges is perhaps the clearest view of this--no oblique slip or non-orthogonal faults anywhere. It's not always apparent in geodetic fields which record interseismic strain accumulation unless there happens to be a big earthquake over the recording period, which does happen occasionally. This gives rise to the idea that the patterns of interseismic strain accumulation are different than those of coseismic strain release which I generally believe and will work on eventually (feel free to get a head start!).

But a quick look through the Global CMT catalog shows the patterns as well. To be clear (I don't have a quick plot on hand but did the analysis years ago) the principal strain axes of a region are not preferentially aligned with plate margins or other major structures; convergence and divergence are frequently oblique. Nonetheless, when we plot rakes and dips of the entire GCMT catalog, it's obvious that 'pure' slip is favored: 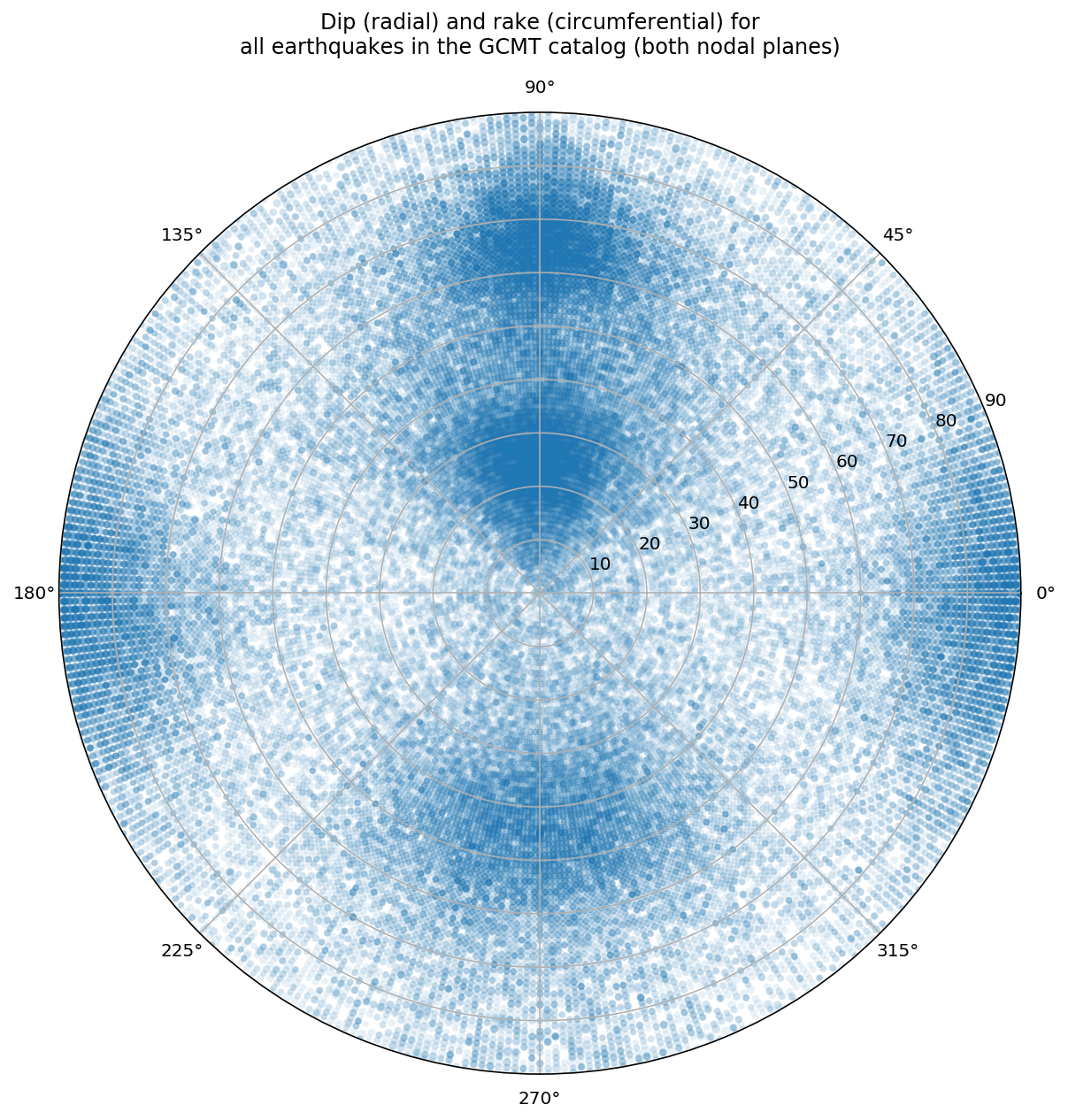 Figure 1: Scatterplot of dips (on the radial axis) and rakes (on the circular axis) for all the events in the GCMT catalot; both nodal planes are included. 90° rake is reverse, 0° is sinistral, 270° is normal, and 180° is dextral.

The latter observation becomes more interesting when we incorporate depth: 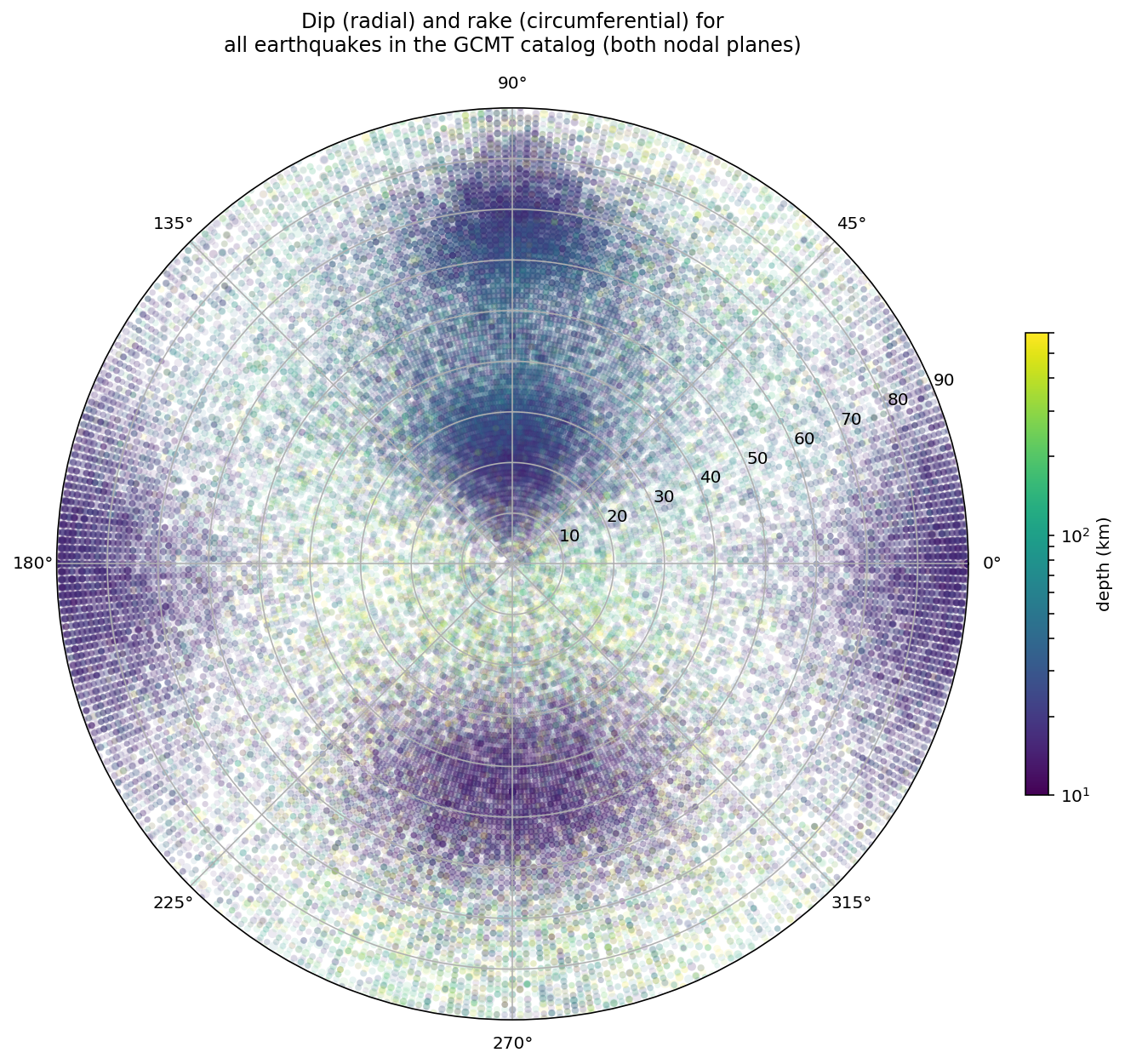 Figure 2: Scatterplot of dips and rakes for all events in the GCMT catalog. Plot is the same as Figure 1, except the dots are colored by log(depth). 10 km depth is dark purple, while 700 km depth is yellow. Crustal events are generally purple, blue are megathrust events, and green to yellow are in-slab events.

We can see from this plot that many of the oblique-slip events are greenish to yellowish, meaning that they are deep (>100 km) slab earthquakes. And a lot of the moderate-angle reverse events (those dipping around 45°) are about 50 km deep, where megathrusts are about this steep. The pattern of obvious shallow slip partitioning and oblique slip at depth is consistent with Andersonian fault mechanics, which predicts that near the surface of the earth, principal stress axes will be either near-horizontal or near-vertical because the earth's surface is a free surface that can't support the shear stresses that would result from other stress tensor orientations. However, this boundary condition fades with depth and seems to be irrelevant in slabs penetrating the mantle, which is no real surprise. It also looks like there are far fewer deep strike-slip events, which may tell us that slabs deform because they stretch or are compressed down-dip as they pass through different densities of mantle, but aren't torqued or twisted sideways.