cross-posted from the GEM Hazards blog

The Global Active Faults project of the GEM Foundation aims to produce a globally complete, reasonably homogeneous dataset of active faults on the Earth's surface for seismic hazard assessment. While most deforming regions of the world have some publicly available active fault datasets that I can stitch together, there are a few significant data gaps. The Central American and Caribbean region is one of these regions, despite the great number of rapidly-slipping faults and large vulnerable population.

With help from my colleague Julio Garcia, I have put together a dataset of active faults in the region, as my contribution to the Caribbean-Central American Risk Assessment (CCARA) program. The dataset is hosted on GEM's github page and is publicly available with a Creative Common attribution license. There are currently over 200 fault traces in the database. These faults span the range from distributed, relatively slow intraplate deformation to major plate boundary faults. The diversity of faulting here reflects the highly variable style of tectonic deformation in the region: many styles of deformation are present, with the only consistent theme being that these faults slip quite fast.

Today marks the release of version 1.0 of the database.

Check out the interactive web map below showing the most up-to-date version of the fault database! You can click on the faults to see all the available information about them.

Faulting in Central America and the Caribbean

Faulting in the region is largely caused by the interaction between the Caribbean plate and the surrounding North American, South American, Cocos and Rivera plates. As such, the majority of faults are located within plate boundary zones extending up to a few hundred kilometers from the major plate boundary faults. For the most part, the majority of strain is taken up on the major plate boundary faults (the subduction zone megathrusts and the transform faults) but the smaller crustal faults in the distributed deformation zones buffering the plate boundaries are still very important to the system, and many have quite rapid slip rates despite their short length and/or geomorphic obscurity.

The distribution of faults within the crustal deforming zones is very influenced by changes in the style (i.e. the rate or kinematics) of plate boundary interaction.

Faulting in the central Lesser Antilles seems to be dominantly normal faulting reflecting arc-parallel extension and the breakup of the forearc into blocks that translate along the arc with different velocities [e.g., López et al., 2005]. Near the center of the arc, subduction is relatively orthogonal to the trench, but with increasing distance along the arc, subduction becomes more oblique (i.e., there is an increasing amount of the strike-slip component) due to the curvature of the arc.

This is often difficult to see in subduction zone settings, where the forearcs are often mostly underwater and covered by messy volcanoes. However, it is pretty clear in the Himalaya, where the entire upper plate (a geometrically-perfect volcano-less 'arc' [Bendick and Bilham, 2001]) is subaerial and the faults are more obvious [e.g. McCaffrey and Nabelek, 1998, Styron et al., 2011].

The rate of change of obliquity in the northern Lesser Antilles is also quite high where the plate boundary makes a sharp turn near Puerto Rico, resulting in extensional systems bounding rigid blocks with different translation velocities such as the Anegada and Mona Rifts [López et al., 2005, Symithe et al., 2015].

This same principal of distributed deformation plays out throughout the Greater Antilles as well: where there is a geometric change in the plate boundary, the kinematics and distribution of faulting change to reflect this. The islands of Hispaniola and Jamaica are both transpressive stepovers along the Caribbean-North American transform boundary, and consequently show some contractional structures (reverse faults) throughout.

On the western side of the Caribbean plate, the Middle America Trench (where the Cocos and Caribbean plates converge) is a bit more linear than the Lesser Antilles trench, so changes in Cocos-Caribbean convergence obliquity are less pronounced. However, the convergence velocity is quite high, so the arc-parallel convergence rate changes along strike, and becomes high as well: It may reach ~20 mm/yr in Nicaragua. In general it seems to increase to the southeast from the North American-Caribbean-Cocos triple junction 'zone' (there seems to be no real triple junction point) in Guatemala. Consequently, arc-parallel strike-slip faulting increases to the southeast as well [e.g., Turner et al., 2007].

There is a broad zone of extension in between the strike-slip faults separating the North American and Caribbean plates, and the Central American and Caribbean forearc. This is manifest as an array of normal faults in the highlands of southern Guatemala and Honduras. Much of the region's population lives in the grabens of these faults, including Guatemala City.

One of the most fascinating aspects of the regional tectonics is the triple junction zone between the Caribbean, Cocos and North American plates. The NA-CA boundary is defined mostly by the Motagua-Polochic Fault Zone, which dies out near the Pacific coast and may merge with the Tonalá fault in Chiapas. 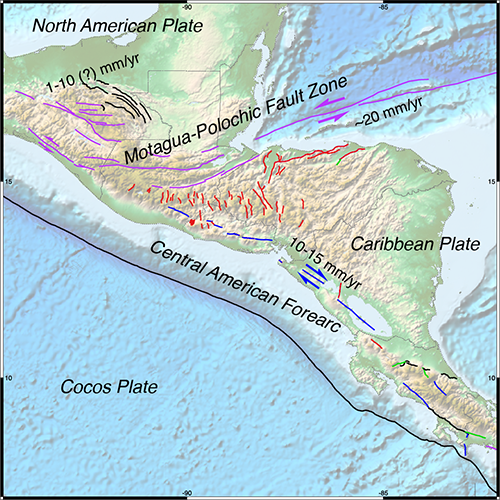 Christine Authemayou has written a few papers on this, summarizing the possibilities for how the pieces fit together here [Authemayou et al., 2011, Authemayou et al., 2012]. The gist of it seems to be that the NA-CA boundary in the region is diffuse and there may not be much relative motion between the northern Central American forearc and the North American plate. The alternative, that the Motagua-Polochic fault zone cuts all the way to the trench, would potentially offset the trench after a few million years, which would be fascinating but this isn't evident in the data.

My pet view of this is that the entire Central American forearc is basically transitional between the North American and Caribbean plates, even as far south as southern Nicaragua, and may move more with North America than with the Caribbean. In a Caribbean-relative reference frame, interseismic GPS vectors in the Nicaraguan forearc move westward (towards the trench) rather than eastward, as one would näively expect from a somewhat locked, seismogenic subduction zone [Turner et al., 2007]. As far as I know, there hasn't been systematic study of this hypothesis as it relates to geodetic or long-term block motion, possible slab rollback, etc. but I may find time to work on it in the coming year.

It would also be quite interesting to catalog triple junctions globally and see how many of them are phantoms, when one looks at them closely.

About the GEM Central American and Caribbean fault database

The GEM Central American and Caribbean fault database was created with the immediate goal of providing data for a fault source model for Probabilistic Seismic Hazard Analysis (PSHA), as well as serving as a resource for characterizing local or regional tectonics for research, education and general interest. As such, a minimal set of geologic attributes for the faults in the dataset are included that are important in PSHA modeling. These attributes primarily describe the fault geometry, kinematics and slip rates of the faults, with some additional information such as the primary data source and the paleoseismic history of the fault. Though fascinating, the region is chronically understudied and much of this information is unavailable for most structures, particularly the slip rates and earthquake histories of the faults.

Fault coverage is reasonably good. The bounds of the map area are from Chiapas, Mexico through Panama in the west, across the North American-Caribbean plate boundary in the north to Cuba, Hispaniola and Puerto Rico, and then south through the Lesser Antilles. The southern margin of the region, the South American-Caribbean plate boundary, is covered by a few other datasets including the South American Risk Assessment (SARA) project and the Active Tectonics of the Andes (ATA) fault maps, which are included in the GEM Global Active Faults dataset.

A few areas need additional mapping. Southern Costa Rica is a hard area to work, given the rugged terrain, dense tropical vegetation, and polyphase deformation history; mapping here is somewhat incomplete and it's very difficult to tell which structures may be active in the current tectonic regime. The southern Lesser Antilles have yet to receive sufficient attention, in part because many of the probable active structures are offshore. Both of these areas are priority areas for GEM, however, so expect more progress on this front in the coming months.

Nonetheless, the dataset is definitely usable, for purposes ranging from seismic hazard to testing of tectonic hypotheses.

While the Central American and Caribbean active fault dataset has been developed by GEM, we welcome contributions from users, whether it is actively contributing fault mapping, discussing potential changes to particular structures or regions, or providing feedback in terms of what we can do to make the data more useful.

The best way to contribute is through the github page; simply go to the 'Issues' page and file one (see here for an explanation of issues). If this isn't an option (for example, you don't have a GitHub account), you can reach me by email at richard.styron[at]globalquakemodel.org

This study is made possible by the support of the American People through the United States Agency for International Development (USAID.) The contents of this study are the sole responsibility of the GEM Foundation and do not necessarily reflect the views of USAID or the United States Government.