This was a post that originally appeared on my old blog. Please note that I have left the post the way it was in 2011, except for the GitHub announcement I made in May 2013; however, please get the HimaTibetMap database from GitHub instead of the KU Hawkdrive, as that older version is no longer maintained.

I am pleased to announce the updated version of HimaTibetMap-1.1. HimaTibetMap is a database of active faults from the Indo-Asian collision zone, spanning from Iran to Myanmar, and India to Siberia, and contains over 1000 structures. The area covered is approximately the same size as the contiguous US. It was originally compiled by Mike Taylor and An Yin based on their field observations, remote sensing analysis, and reviews of the literature, as described in Taylor and Yin (2009). It was since updated slightly by Mike and myself, and released to the public as outlined in our Eos article from May 2010. 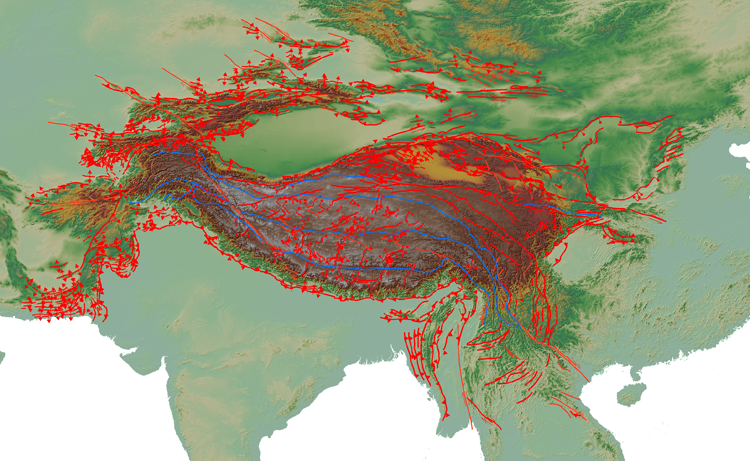 Map showing the extent of HimaTibetMap-1.1 made in ArcMap with topography from SRTM.

The database is available for ArcGIS, GMT, and Google Earth. The Shapefile version (for ArcGIS; but it’s compatible with Quantum GIS, Grass, and many other programs) is the original version and contains the most information, due to the nature and capability of that file type. Kinematics for each structure are easily displayed using the GPSec.style file that is included in the .zip. 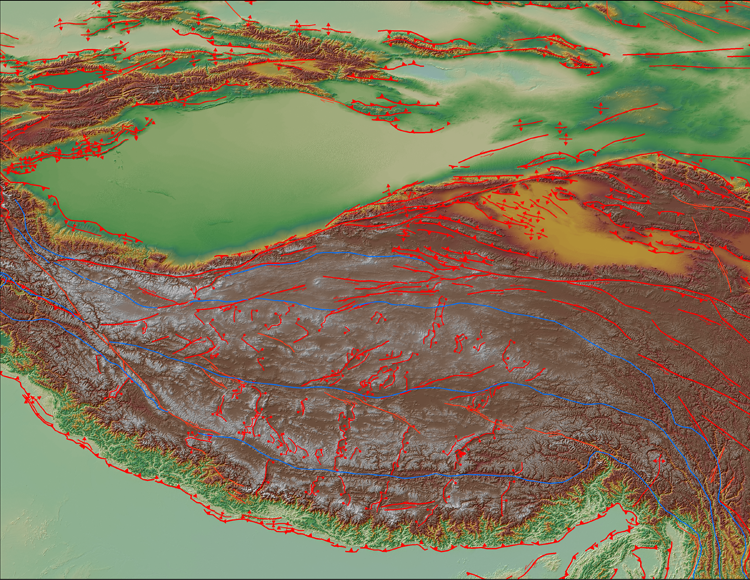 Structures of the Tibetan plateau

I have used all quite frequently in my work, though I imagine the Google Earth (kml) version would be the one most favored by those not doing academic research in the region. It is incredibly fun to cruise around the orogen and see all the faults on top of the topography! The structures in Google Earth contain much of the metadata of the Shapefiles, as well, so you can click on the structures and see the type of structure, references (if any), etc. 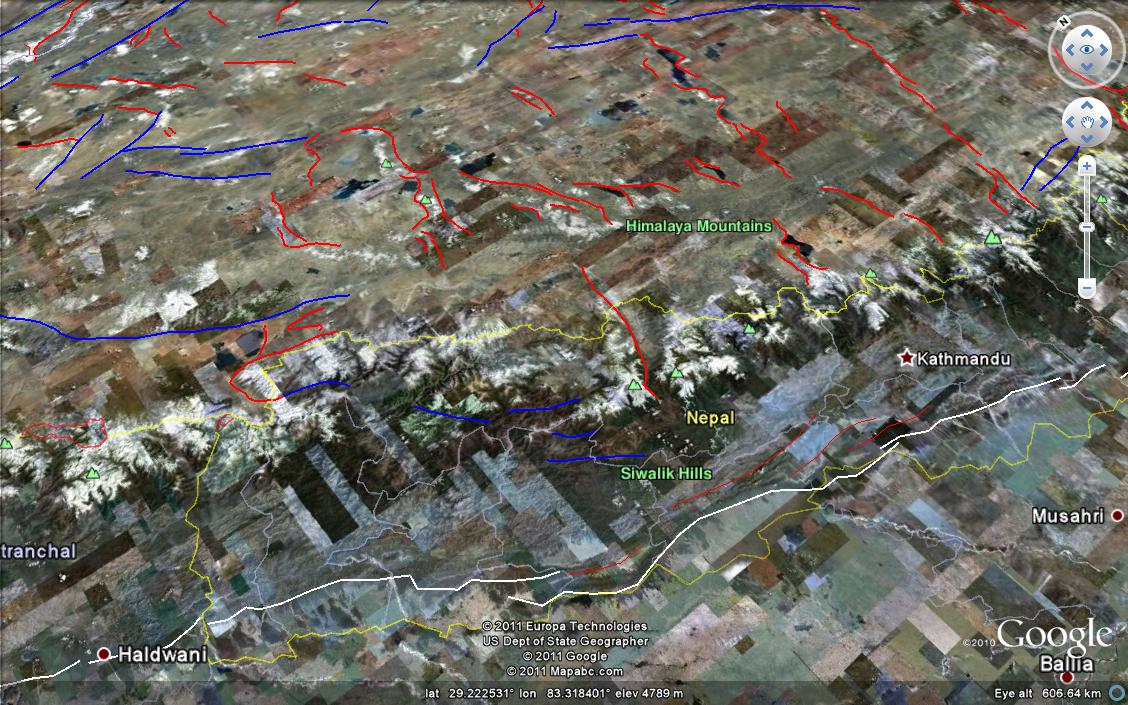 Oblique view of the Nepal Himalaya and southwestern Tibetan plateau in Google Earth. Normal faults are shown in red, strike slip faults in blue, and thrust faults in white.

The new version, 1.1, is largely similar to 1.0, except for the addition of 20-30 new structures. Most of these are rifts in southern Tibet and the Himalaya. The most (structurally) significant of these are the Leo Pargil and Ama Drime metamorphic core complexes, accommodating arc-parallel extension of the Himalaya. There are also quite a few smaller rifts on the Tibetan plateau (mostly in south Tibet near my field area) that have been added, and minor changes have been made to several others.

Some other, less geologic changes are that the suture zones and borders of Cenozoic volcanics have been given their own Shapefile, for the Arc users. This allows them to have different symbology than that specified by the .style file. The .style file intended for this database has also been included in the zip file as well, as it’s no longer readily available on the Internet as it was when the Eos article was submitted.

Edit 3 May 2013: The maintained version is now on GitHub

Other potential improvements to the database are making the volcanic distributions into polygon shapefiles, having information on slip rate, initiation age, and other similar information for structures (although currently this data is sparse and hotly contested…) and maybe expanding to the northeast (Baikal region) and the west (into Iran).

If you have any requests for this database, such as certain structures, regions, file types, etc., please let me know! I will be happy to accommodate. Also, any comments are also welcome.

And although this database is open to the public, if you use it in a scientific publication (including posters and oral presentations at talks), please cite us! The proper citation is the Eos paper:

although citing Taylor and Yin (2009) is also recommended.