This post originally appeared 14 March 2011 on my old blog. The text and figures are shown here unedited. Presently, I think a lot of this can be explained by Mohr-Coulomb mechanics and rheologic heterogeneities in the crust. I also cringe a little at the way I did the statistics... Also, I don't know right now how to format the figure captions in Markdown.

One of my favorite problems in tectonics is earthquake slip obliquity and partitioning, particularly where dip-slip and strike-slip motion are accommodated on separate faults (vs. similar slip on several adjacent structures) when stress is transtensional or transpressional with respect to the faults. Though motion at plate boundaries is almost never truly parallel or perpendicular to the plate boundaries, much of the time earthquake or fault slip is; a prime example of this is mid-ocean ridges, which are partitioned into roughly orthogonal normal fault segments and transform fault segments.

This is an interesting problem because it’s a global phenomenon, happens on a variety of scales (from plate boundaries to at least field mapping scale; I don’t know about outcrop to microstructure scale), and has considerable implications for fault loading and seismic hazards. And I don’t consider it to be sufficiently explained. It does crop out in the literature now and again, and someone will throw out a new theory, and maybe look at a couple of different seismic events, and call it good, but we are awaiting a rigorous, global study.

I’ve poked at this problem a bit over the past couple of years, and though I have not arrived at a solution, I have had some fun with it. I have approached it from two different standpoints. One of them is an observational approach: considering the global earthquake focal mechanism and plate boundary catalogs, and doing basic analysis (stats, etc.) on those data. The other is a theoretical approach: basic modeling of friction during oblique slip on a dipping fault vs. dip slip on a dipping fault and strike-slip on a vertical fault. For this post, I’ll stick with the observations; the modeling is interesting as well, but I need to rethink some of it before posting.

Several things are evident from this figure. The first is that, in general, earthquake slip is not very oblique: most of the events are yellow (less than 15 degree rake). Secondly, it is obvious that there is considerable spatial variation to the amount of slip obliquity. We can see that some plate boundaries, such as the Sumatran trench, tend to have a lot of low-obliquity events, whereas others, such as the Mid-Atlantic Ridge, are fairly oblique. 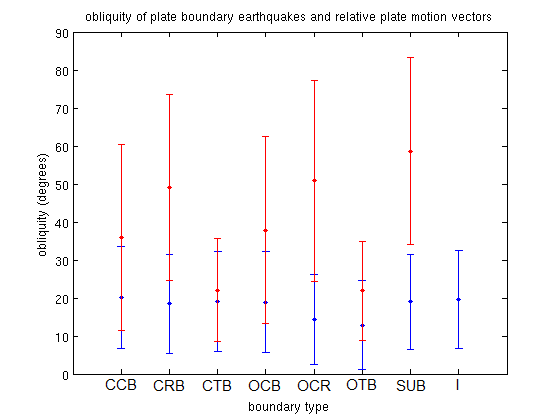 This figure shows that slip partitioning is especially complete at subduction zones, fairly complete at rift margins, and not a big deal at transform boundaries. However, earthquake slip obliquity is very similar in all tectonic settings, suggesting there are some very fundamental controls on potential slip obliquity that may have to do with fault mechanics. Now, I have to admit that these two datasets are not completely comparable, in that the earthquake slip obliquity is calculated directly from the rake while the plate motion vectors are purely horizontal, and there are some simplifying assumptions I had to make when dealing with earthquake nodal planes, etc., so this could be more rigorous, but I think that the gross observations here are solid.

What I find striking, though, is in a comparison of these two figures, and how in the same tectonic setting, different plate margins can show very different amounts of partitioning. Take the subduction zones of Sumatra and Chile, for example: though Sumatra is overall a much more oblique system, its earthquakes appear less oblique than Chile’s. It’d be interesting to look at each of the plate margins on earth, and compare their geology to the earthquakes and see what trends become apparent. Maybe I’ll start on this when the semester is over.

In the mean time, I’ll take another look at the frictional modeling I started, and post that as well.